The weather was dry and started cloudy with a fresh wind from the ENE, force 4 to 5 with some much stronger gusts.

All boats were clean away for race one with a beat to the first mark Chris Robinson (867, Burfield SC) a short distance in front of Eddie Pope (377, Ogston SC) but a cleaner gybe by Eddie allowed him to take the lead on a run down the lake. At the end of lap 1 these two boats were neck and neck closely followed by another four boats. The gusts were too much for some and the safety crews were kept busy ensuring the safety of some who failed to stay upright.

Capsizes were the deciding factor in place changes through the fleet for the remainder of the race with just seven of the twelve boats completing the course. Chris Robinson crossed the line first followed by Eddie Pope with Nigel Fern (845, Staunton Harold SC) and Jenny Chuen (839, Nottingham SC) just in front of the first Attenborough boat sailed by Malcolm Davidson (856). Rose Wilkinson, a junior from Nottingham SC and Martin Loud from Winsford Flash SC were the only others to complete the course.

During lunch the wind became more easterly and so a change of course was required. Its strength had also increased and just six boats took to the water. The beat to the first mark was followed by a reach to eastern end of the lake and a run/very broad reach down the full length of the lake. There were some strong gusts and as in the first race they took their toll on the number of boats completing the course and just four finished. Chris and Eddie gave a master class in strong wind sailing and both pulled out a large lead. Chris took the honours from Eddie. Jenny Chuen took a third place having completed one less lap than the leaders and Nigel Fern completed the list of finishers.

The fleet had decided on a rest between races rather than back to back and they took this time to debate whether to undertake a third race. After considerable deliberation they decided to call it a day. With two “bullets” Chris won the meeting and the decision not to sail a third race meant Eddie took second, Nigel third and Jenny fourth. 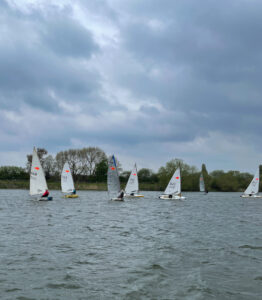