Attenborough Sailing Club places great importance on providing a high quality assortment of boats for our junior and youth members and has invested significantly in this area. All these boats are free to use to our members.

There are a number of single and double handed (one and two person) dinghies that are designed with young sailors in mind. A few examples, along with details of those the club own, are shown below: 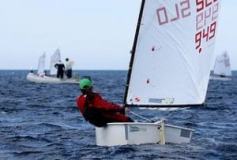 The Optimist is one of the most popular sailing dinghies in the world, with over 130,000 officially registered in over 100 countries and many more unregistered. The boat is just under 8ft long and is designed for an age range up to 15 years old.

They are very widely available from around three hundred pounds.

Get the Bug! Similiar in size to the optimist, the bug has two ‘rigs’ – the standard rig, which is ideal for training and confidence building. The race rig is designed for more experienced sailors that want extra power.

The Topper is an 11 foot sailing dinghy sailed mainly in the British Isles. Since it was designed in 1977, over 50,000 have been sold.

The club has an assortment of older Toppers.

The RS Feva is a superb double handed boat for young sailors.

For the more adventurous, it can also be equipped with

a gennaker. The club has two Fevas.

The Laser Pico was designed in 1995 by Olympic medallist

Jo Richards – it features a high boom and self draining cockpit.

It can be crewed by one or two children.

The hull has built in buoyancy and its thermo plastic construction

make it strong and stiff .  A sport version, with uprated sail and control lines,  is also available.

Taking the Next Step – Buying Your Own Dinghy

Young sailors are encouraged to buy their own dinghy – apart from the pride of ownership, this allows the dinghy to be modified to the sailor’s own specification. A number of club members would be happy to advise on suitable boats, if needed. Space is usually available to store your boat at the club for a small fee.