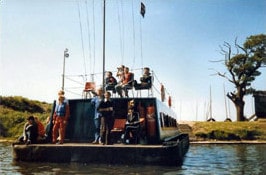 The Club was founded in 1959 as the International Combustion Sailing Club and sailed at Weston-on-Trent. Derek King, a founder member and Secretary of the club at that time has been good enough to recollect those early days in words and with photos. He recollects that in 1962, with the loss of depth of water due to the collapse of a weir, the members sought new water and approached Long Eaton Council with the view to sailing on the river at Trent Meadows. This was agreed and the move took place in 1962. At that time the members built brick changing rooms and also transported a wooden hut to the site which was used as the Clubhouse until 1972. Launching into the river was by means of a concrete ramp which served as an extensive landing stage. Signs of this can still be seen today.

In 1972, due to internal pressures placed upon International Combustion Ltd, an approach was made to change the administration and name of the Club to Long Eaton Sailing Club. The then Trent Gravel Company wished to extract gravel from further up stream and so cut a barge canal through the club. Against the wishes of the Attenborough Village Green Association, this forced the club to move to the Coneries Lagoon in 1981. With financial assistance from Broxtowe BC and the Sports Council a floating barge clubhouse was purchased for £9,268, fitted out by the members and opened on 14/07/84. These were turbulent times for the club and are further documented in “Battle for the Coneries” written by a former member who did much to ensure the future of the club at that time, Bob Burton.

In 1990 a security moat was dug and mounds were removed from the compound with the assistance of the Royal Engineers.

The name and club logo was changed to the Attenborough Sailing Club in 1998. Cemex and the Club finally signed a 21 year lease in October 2006 providing a more secure use of the Coneries. A fleet of 4 new RS Visions were also purchased at this time for use as club & training boats. Changing rooms and showers were added to the club along with a new in board diesel Committee boat in 2008.

The Club continues to enjoy a friendly atmosphere as it has done throughout its long history. The membership now stands at 135, which includes individual and family memberships as well as Sea Cadet and Scout groups, totalling over 265 members. Long may it continue to thrive.

Some early pictures when sailing on the river Trent and during the period of gravel extraction creating current sailing water kindly provided by Ken Slack;

Year Notable Milestones
1959 International Combustion SC forms & sails at Weston on Trent
1962 The club moves to Trent Meadows due to a collapse of a weir
1972 The Long Eaton SC is formed on 15/12/1972
1973 Club member Miss Patton designs the club logo
1979 The club becomes a recognised RYA training establishment
1980 Access to the club is cut off & sailing starts on Coneries Lagoon
1981 The club officially moves to Coneries
1983 The club purchase a floating barge (£9,268) as a clubhouse
1984 100 people attend the official opening of the clubhouse 14/07/84
1985 Access to the club via Barton Lane is granted
1989 The “Warren Point” peninsula starts to be removed
1990 Mounds in the compound are removed, moats dug & fencing erected
1991 Mains water is connected to the club, and shallows are dredged
1992 Electricity is supplied via a larger diesel powered generator
1994 New marks numbered 1 to 9 are positioned around the lagoon
1997 Mains electricity is connected and the club changes name to ASC
1998 Memberships start to fall and so Open Days are introduced
2000 The club is badly affected by floods and boats are swept away
2002 A secure steel container is purchased for powerboat storage
2004 New plastic jet float pontoon is purchased
2006 The club purchase 4 new RS Visions for training and club use
2007 The Club & Cemex accept and sign the long awaited lease
2008 Showers are installed & a new committee boat purchased
2009 The club celebrates its 50th Anniversary
2010 New pontoons & walkways are installed and 4 x junior club boats purchased
2011 The clubhouse is refurbished with new kitchen, side benches and lighting
2012 Telephone line and internet connection is installed along with webcam
2014. Clubhouse painted externally.
2014. Club awarded £50000 towards the build of a new clubhouse
2015. Eric Twiname Trust awards club with a new Topper dinghy
2016 Clubhouse build starts with footings dug in January