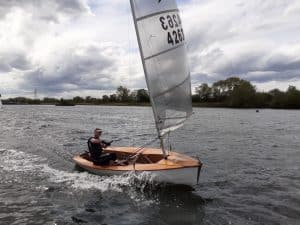 The day promised great sailing conditions. Finally some warmth in the air, some sunshine and best of all, fair winds blowing consistently up the pond from the South West. Using the new committee boat, Connie, on her inaugural race duty on the first race, enabled OOD Ray Kemish to set a traditional course. A long beat to the windward mark at F, was followed by a long run back along the water to 3 before a little jaunt around the islands and a return through the gate. 10 sailors took to the water, with new member Andy Alcock racing for the first time in his splendid wooden Solo. Another member for the growing Solo Fleet.
Jon Adams and Kevin Milton in the Phantoms, unsurprisingly, were away fastest up the beat after a relatively clean start (barring an altercation between Rob Corner and Roger Day which ultimately saw Rob disqualifying himself at the end of the race). Andy Alcock led the slower boats and maintained a good position throughout the fleet. Geoff Marshall and Pete Hampshire were also challenging in the early stages.
Freshening breeze saw Andy Beaumont in his Comet retire after a capsize at number 5, and a few competitors looked to be tiring towards the end of the Race. Jon looks to be getting to grips with the Phantom and took line honours. The limited opportunity for the faster boats to tear away on a screaming reach meant good close finishes on handicap, with the first 5 boats within a minute of each other. Andy Alcock took the honours on his first race at Attenborough! A great performance in unfamiliar waters. Surely one to be reckoned with for the future.

Ray took pity on the weary warriors in the second race and added a reach to the course between 6 and 2, but retained the long beat and run. This provided for some good photo opps from Connie’s decks as boats were passing close by on all points of sailing.
The race took a similar pattern to race one, but Pete Hampshire was challenging and leading the Solos, until he missed the gate and had to back track at the end of the first lap. This time, despite casually sipping gin and tonics and sunbathing from the side decks, Roger in the Gull was able to maintain focus and finish at the top of the podium on handicap.

Star of the day was Connie! We now have a great little committee boat, with a lovely new flag gantry. Today showed that using the committee boat enables us to set much more interesting and competitive race courses – no more reaching starts or short first beats necessary. Lets all make sure she gets plenty of use for future race days!! 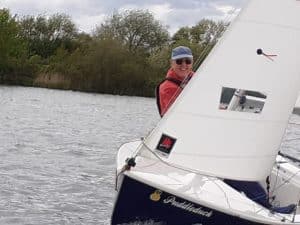