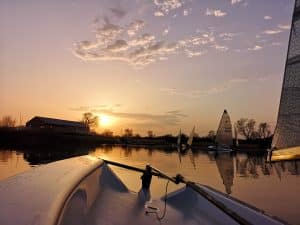 Everyone except the wind turned up for the first Wednesday race of 2021, following the relaxation of lockdown rules this week. Two Phantoms of Kevin Milton and

were first over the start line. Sadly these pair were the only two that qualified as having started, with

all on the pre-start side of the line after the first five minutes of the race.

Having started well, Kevin Milton decided to sail backwards to the start line, perhaps he was not happy with his first attempt, and then decided enough was enough, leaving Duncan battling it out with… Well…. Himself. Having not reached the second mark after 30 minutes, race officers

decided enough was enough and abandoned the evenings racing.