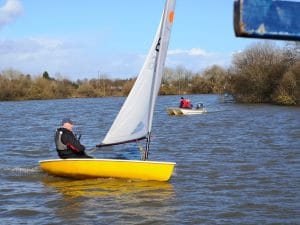 It only feels like we have just started this season a few weeks ago and now we enter the final Wednesday evening series.

With a favourable wind forecast for the evening, it must have been the threat of the water falling down from the sky that kept most away, but with a solid 8 turn out for race one of series 3 we were to meet with a great course set by ood and commodore Keith B, the course took advantage of most buoys around the lake and gave us room to stretch our legs, not to mention battle it out.

We set off and those who navigated the weed at number 7 got out the way. with Duncan and Kev Milton in the phantom pulling away from the pack. leaving the rest of the fleet to battle it out.

The newly returned Paul Kelly proved there is life in the old dog still by finding the go button in his solo and was Giving Mike P a Race, the Supernova’s seems to struggle a little bit with wind or it might have been the weed or perhaps the which was around the island togo… only they can tell you this.

Ray in his laser had a fine display of the most frustrating race, by getting court in weed… catching back up only to come to stop again. Keep going Raymondo is all i can say.

Whos up for the next race?
New or old, let’s get on the water

if the last one out could turn the lights off!