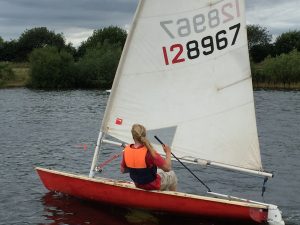 Congratulations to Nick Colbeck who won the May pursuit race. Based on personal handicaps for the first time in a few years, the results were close apart from the winner and Andrew Beaumont who came second. The next 8 boats all finished within a minute of each other with Mike Pritchard just edging in to third at the final mark.

The second race was first of a three race series based on personal handicaps. The next two will be in September and October. Louis Mok and Kevin Milton both had good starts and led the fleet away. Kevin Last fought back but engaged with the gate mark and lost ground. Kevin won on the water but a great performance from Mick Adams saw him take first from Kevin. Louis Mok came third, beating Mike Pritchard by one second on corrected time.

Overall the personal handicap system worked better than I expected and using this system certainly leads to closer results.

This weekend we return to the Spring series with Gold, Silver and Bronze fleet race followed by a Fast and Slow race.