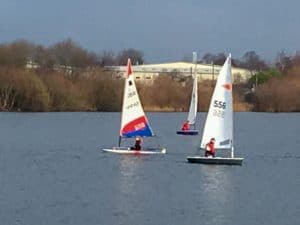 Nine boats took to the water in this years Cold Turkey race today in light force 2 to 3 south westerly winds. All boats were single handers ranging from a Phantom to a Topper and ages ranging 11 to 70+.

All boats got away cleanly and very soon the fleet sorted itself out with the fastest boats leading and others following roughly in PN order. There were three Supernovas participating and there was some changing of position within this group but otherwise there was no change of position just variation in time gap between boats.

After the application of handicaps the final positions were very close. Kevin Last sailing his Supernova won by 16 seconds from Jill Reid (junior) sailing a Laser full rig who was just five and a half seconds in front of Paul Kelly in his weeks old Supernova. Full set of results in the results section of the web site.

Iona Reid was out in her Topper to complete her year of sponsored sailing and has raised almost £1000 which will be split equally between Water Aid and Guide Dogs for the Blind. Hopefully this dedication to sailing will continue. Well done Iona.