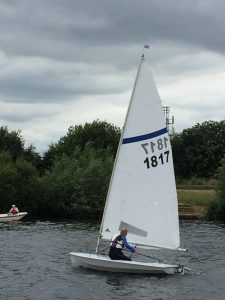 Paul Jago sailed two stunning races to overcome the difficult conditions with the wind coming in from the railway line. The increasing weed caused a few problems for some of the larger boats and the committee will be looking at this challenge this week – any environmentally solutions welcome. Paul Jago won the first race from Mike Pritchard and Jon Adams sailing the super fast Phantom, 1261. Jon beat Ke4vin Last by one second due to fact he actually sailed one lap more than anyone else with this lap his fastest of the day. An excellent performance by Sam Lowe who came fifth in his Laser. Our Rear Commodore took to the water with his daughter in their new National 12. Early days and Layla expects helm to improve.

The second race saw a competitive fleet of four battle out for the Fast Series with Kevin Last winning from Bob Cuerstemont and Roger Day. The larger Slow fleet saw a good battle on the water between Paul Jago and Mike Pritchard but once the handicapper had done their calculations there was another easy win for Paul with Josie Adams third and Jack Smith fourth.