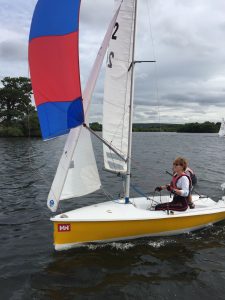 Nick Marlow provided a stunning performance today to win both races first on his own and then secondly with Ruth. Unfortunately with the dreaded DNC for too many races they are out of contention as both Frostbite series end next weekend.

In Frostbite 1, Roger Day and Kevin Milton are tied on 4 points with Kevin Last on 7.5 points and these three are guaranteed a podium position. Kevin is third and has no chance of winning whilst Roger just has to beat Kevin Milton to win his first trophy of 2016.

In Series 2, Kevin Milton and Roger Day are both ties on 5 points, whilst battle for third is between Kevin Last and Paul Jago. To win overall, Roger has to come third or better and beat Kevin overall in the last race. All exciting times and seems a new Supernova is the must-have for Christmas. No longer 15% off but of you want a sewing machine see our RC Sailing.