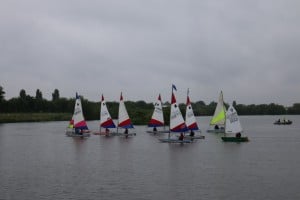 On Saturday the 13th June, 14 members of Attenborough Sailing Club, Girl Guiding and Scouting came to Attenborough Sailing Club to participate in the ASC Scout / Guide Regatta. Although it was raining and there wasn’t a lot of wind, all of the competitors went home with a smile on their face. In the morning, there was race coaching that was organized by the ASC Training Principal Keith Brereton and the Scouting and Guiding Leaders. The sailors were taught about efficient Race Starting, Turning, and the basic Rules of Sailing. Then, in the afternoon, the race officer of the day, Brian Dennis, chose a course consisting of 4 buoys which was close to land as that was where the most wind was on the lake. The club safety boats were manned by Kevin Last and Michael Motteram and Colwick Park Lifeguards providing extra safety. Everyone was sustained through the wet by regular refreshments prepared by a small group of Girl Guiding leaders.

For raising the most money, 2nd Bramcote Beavers win a free afternoon of sailing at Attenborough Sailing Club. In total over £900 was raised for the charities, this will be divided up equally between the charities.

At the end of the day, there was a prize giving ceremony.

I would like to say a big thank-you to all of the sponsors and to everyone who donated money, food and time as without them this race would not have been a success. Charlie Fogg’s shop generously engraved the trophy metal plates for free. Yachts & Yachting, Local Magazines Ltd and the University Of Nottingham MEU helped publicize the event. Each competitor received a free competitors pack which was donated by sponsors including Allen Brothers, Gill, Marlow Ropes, Crewsaver, RYA Green Blue, Clamcleat and MERCK Millipore. McDonald’s(Chilwell Retail Park). The Co-operative Food and the Chilwell MOT Centre contributed to the food on the day. Professional photographers Mark Storey and Dale Russell attended the event in the afternoon and took many fabulous photos of the competitors. I would also like to say thank you to the Attenborough Sailing Club for allowing the event to be held at their club and for the use of the club facilities and to all the other people and companies who helped make this event a success.