Kevin Last wins on a quiet Wednesday from Ray Kemish and Jon Adams.

A lovely sailing day with sunny intervals and a nice challenging breeze.The Gold fleet was won by Mike Pritchard who has now won overall with a game to play. Second place depends on last race with Roger Day and Bob Cuerstemont in their Supernovas battling it out, whilst Kevin Milton needs to win the last […]

A strong performance after a good start resulted in Roger Day winning the gold fleet from Mike Pritchard and Andrew Beaumont. The silver fleet was won by Nick Marlow from Rob Corner and Jon Adams. Brian Dennis won the bronze fleet from Louis Mok and Nick Colbeck. With two races to go the fleets are […]

To a background of heavy bass from the Download Festival, six boats drifted around an excellent course set by Bob Ceurstemont. Gold winner was Mike Pritchard from Roger Day and Kevin Milton with Louis Mok winning the bronze fleet from Nick Colbeck. Silver fleet sailors seem to prefer stronger winds. The second race was not […] 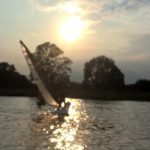 Another great turn out for the Wednesday series. Some great racing had by all and a great battle was had by the Phantoms. Race winner was the phenomenal Jon Adams in the RS300 from Roger Day and Kevin Milton. The early afternoon racing was a success so why not pop down. 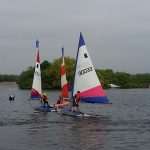 Saturday 4th June, a beautiful afternoon for sailing, saw 5 of the club’s under 18s on the water for the 4th race in their Cygnet Series and some fun aimed at improving their sailing skills, including sailing in reverse. What’s the point? Try leaving a busy pontoon or stopping and reversing your boat on the […]